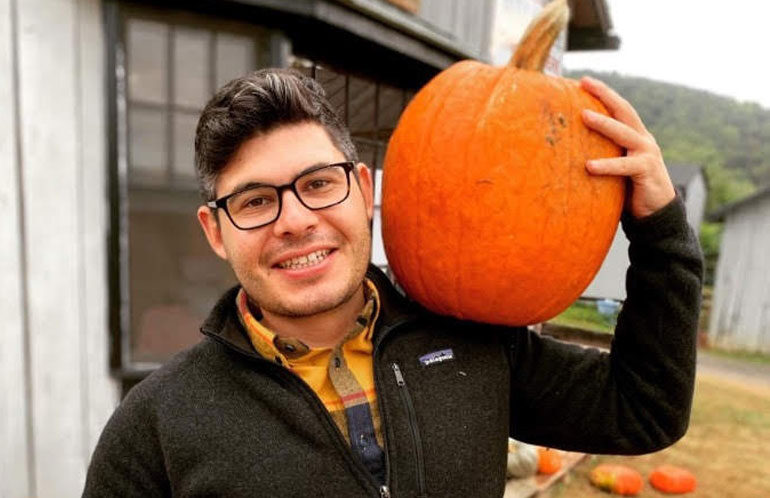 You’ve been with Fíonta for 6 months now. What first attracted you to Fíonta?

What attracted me? Hmmm – I was getting bored with in-house and I wanted to have a greater impact on the world. I heard about Fíonta through my partner who literally Googled “Salesforce Non-Profit Work” and it turns out she had a connection that works here (Julia Kelmers). Julia and I grabbed coffee one morning and seemed super excited about the work we do. Next thing you know, I’m applying!

What were you doing before you found your way to Fíonta-ville?

I was a competitive gourd grower. Just kidding – I did private Salesforce in-house admin work. It’s stable and less challenging but it can also be quite dull at times which is why I even looked at Fíonta in the first place!

You are one of our regularly-in-the-office DC folks. How has the remote experience during COVID-19 been for you? What’s the best work-from-home hack you’ve discovered?

Actually – I have only stepped foot into the office once! (Editor’s note: In my slight defense, I’m part of the West coast contingent / haven’t been in DC during 2020!) That was during my final interview. I was due to start on April 13th but then Sarah Miller reached out and asked if I wanted to bump it up – the COVID crisis just hit the stage of “everyone quarantine” and she wanted to make sure that I had health coverage ASAP. It was very kind.

My remote experience has ebbed and flowed. I have a few college friends that I keep in touch with via PC Gaming and a few friends in DC that I used to regularly see. My college friends’ and my schedules haven’t changed much since it is an activity you can do digitally but I do see my DC friends less frequently. I used to host a party every year on some random Saturday in June called [Date in Spanish] de Junio – but that didn’t happen this year… because, ya know, COVID. And, I grill a lot less than I used to. It’s not as much fun alone.

Best work-from-home hack? NAPS! I tend to eat my lunch fast and then use the rest of the hour to get in a nap. I think naps just run in my genes because my dad is a nap champion. You wake up and you feel so refreshed and ready for the afternoon. I understand why siestas exist in certain parts of the world – the US is way behind.

Tell me about a project that you’ve been a part of here at Fíonta that has been particularly meaningful to you? Why?

I think it’d have to be Emergency Nurses Association (ENA) – we did some NPSP work with them and they were just so grateful and funny! It felt like working with friends. (Editor’s note: BRB, getting pots and pans and noisemakers to cheer for emergency nurses!)

Which Fíonta core value rings your bell the loudest?

You know what’s funny? My partner and I have a relationship contract (suggested by an article we read in the New York Times). It’s not a like a prenup or legal thing. It’s about what each need out of one another. Our first tenant is ASSUME POSITIVE INTENT! Ain’t that nuts? So that rings my bell. Practicing it in my life has saved me so much headache. I think sometimes people can get into a funk where they assume the world is out to get them. That core value smashes that thought because it lets you know that humans (myself included) are not innately malicious. We are all just on this giant rock floating through space doing the best we can with what we’ve got.

Where do you see your career at Fíonta going?

This question always bothers me. Sometimes I’m not even sure what I’ll be doing tomorrow let alone 10 years from now. I mean, I just turned 30 and I cannot believe how different my life is now versus when I was 20. Heck, this time next year I could be in space or Nebraska!

However, let’s say I’m still around for the foreseeable future and still at Fíonta. Then I’d see my career probably evolve into a tech lead.

What do you enjoy doing outside of work?

Netflix but only because Hulu isn’t truly ad-free.

I’m not a fan of sweets, to be honest. So, you can have them. (Editor’s note: No thanks, I’m all about salty and sour.)

Fall! We get Thanksgiving and cool weather that is perfect for camping and campfires!

Tent! Away from people and civilization. Odd, I know, considering I live in one of the crowdiest (according to Wikipedia, it’s a word) cities in the US

Crunchy peanut. The texture and price are real winners.