Skip to content
/ Blog / Growth Force – An Inside Look at the Salesforce.com Foundation 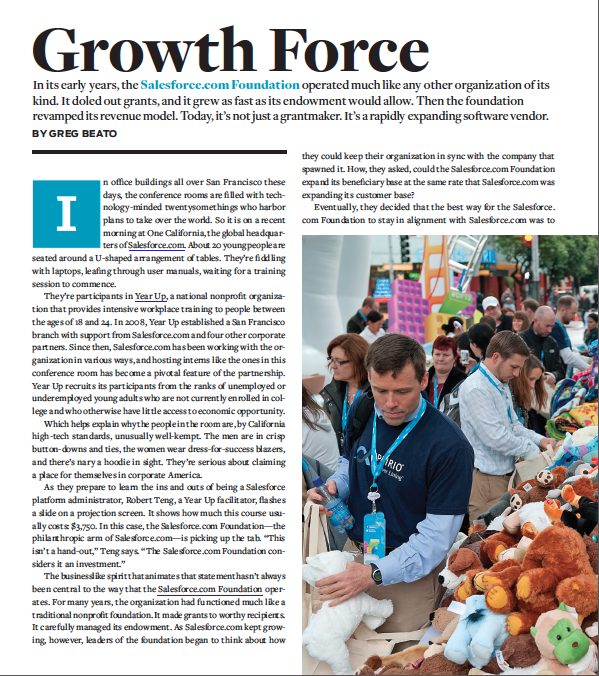 We are pleased to share this fabulous article by Greg Beato of the Stanford Social Innovation Review about the Salesforce.com Foundation.

In its early years, the Salesforce.com Foundation operated much like any other organization of its kind. It doled out grants, and it grew as fast as its endowment would allow. Then the foundation revamped its revenue model. Today, it’s not just a grantmaker. It’s a rapidly expanding software vendor.

In office buildings all over San Francisco these days, the conference rooms are filled with technology-minded twenty-somethings who harbor plans to take over the world. So it is on a recent morning at One California, the global headquarters of Salesforce.com. About 20 young people are seated around a U-shaped arrangement of tables. They’re fiddling with laptops, leafing through user manuals, waiting for a training session to commence.

They’re participants in Year Up, a national nonprofit organization that provides intensive workplace training to people between the ages of 18 and 24. In 2008, Year Up established a San Francisco branch with support from Salesforce.com and four other corporate partners. Since then, Salesforce.com has been working with the organization in various ways, and hosting interns like the ones in this conference room has become a pivotal feature of the partnership. Year Up recruits its participants from the ranks of unemployed or underemployed young adults who are not currently enrolled in college and who otherwise have little access to economic opportunity.

Which helps explain why the people in the room are, by California high-tech standards, unusually well-kempt. The men are in crisp button-downs and ties, the women wear dress-for-success blazers, and there’s nary a hoodie in sight. They’re serious about claiming a place for themselves in corporate America.

The businesslike spirit that animates that statement hasn’t always been central to the way that the Salesforce.com Foundation operates. For many years, the organization had functioned much like a traditional nonprofit foundation. It made grants to worthy recipients. It carefully managed its endowment. As Salesforce.com kept growing, however, leaders of the foundation began to think about how they could keep their organization in sync with the company that spawned it. How, they asked, could the Salesforce.com Foundation expand its beneficiary base at the same rate that Salesforce.com was expanding its customer base?