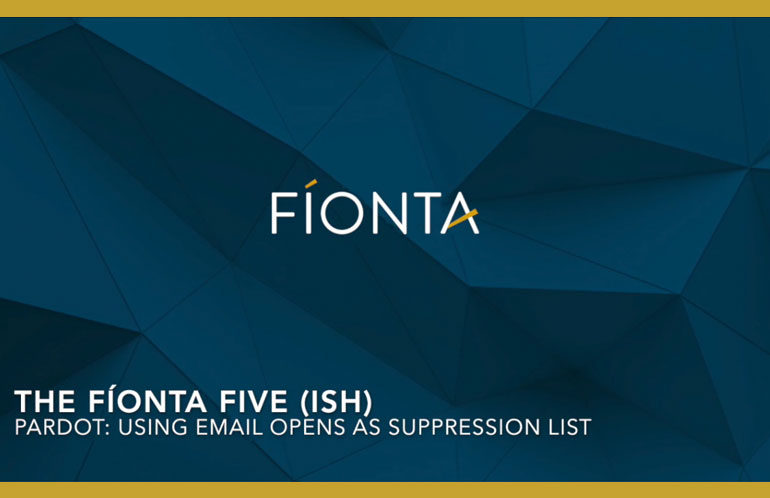 In this episode of The Fíonta Five-ish, we’re tackling a common Pardot request…how to send out a followup email to people who did not open the original email. It’s so easy that this Five-ish video is more like Four-ish!

Today I’d like to send an email in support of an event I’m having soon. I’ve already sent the first email to a large group of people, inviting them to the event. A certain number of people opened the email. A smaller number RSVP’d to the event. And now I’d like to send a second email to try and get the attention of the people who didn’t open the email the first time around. I’ll try a different subject line. I’ll try sending it at a different time of the day, perhaps a different day of the week. But I don’t want to email the people who opened the invitation already because they may not be able to attend for some reason. They may have actually RSVP’d in the affirmative. So, I certainly don’t want to be rude and ask someone to attend something that they’ve already demurred or RSVP’d in the affirmative.

To do that, I need to create a suppression list for those who have opened, and then I will send the email and suppress the opens. So, that’s actually really easy to put together in Pardot. I’m here on the Pardot dashboard. We can go up to Reports. This can be done in Pardot Classic as well. We’ll go into Marketing Assets > Emails > List Emails. This is a table of all previously sent emails. It’s the most recent one that I’m looking for. So, this is my email report, what I would look at right after I send the email to start to see my open rate and my click through. What I’m looking for here is the unique HTML opens. It’s a link here. It’s also a link here. They go to the same place. And this is a table of all of the prospects who opened this particular email. There’s a number of things I can do with this list in the tools dropdown. But first I’m going to select all. There are 50 records on this page, and there’s two pages of records. So, I do want to say select all 70 records in the table.

I’m going to add to list. We’re going to create a list. You don’t have to have one already prepared. So, create a new list. I will call this list “Did Open NYC CC Email.” A list needs to be assigned to a folder. So, I’ll just make sure, it’s sitting here in the lists folder. You can put that elsewhere. You can add an archive date if you like or tags. You don’t want this to be a public list. You don’t want it to be CRM visible. So, now we’ll go ahead and say, “Save list.” So, we have 70 total prospects, 66 of whom can be emailed. That means four of them unsubbed or had hard bounces and have been moved to the recycle bin. That’s a 94% mailable list. Now this list is my suppression list.

So, I’ll go ahead, and I’ll create that follow up email with my revised subject line. I’ll create the email just like I did the first one. And when I go to schedule it, I’ll choose the master list as the recipients, and I will use this list as my suppression list. So, I’m certain that everyone who receives the email will be one of the people who has not already opened it. Now, it’s important to note that this is a static list. It is reflective of the number of prospects who opened the email right now when I created the list. So, this really should be the last thing you do before you send that email out to make sure that you have the most current list of opens. Good luck. Have a great day.